This article also features in The Report: Oman 2016. Read more about this report and view purchase options in our online store.

Banking
From The Report: Oman 2016
View in Online Reader

Oman’s stable and tightly regulated banking sector has continued to perform well in recent times. The expansion of the newly launched sharia-compliant segment, coupled with strong asset growth, has been central to the sector’s development. Indeed, the Central Bank of Oman has established a Sharia Supervisory Authority to help regulate the sharia-compliant segment while commercial banking assets have continued to expand, growing at a compound annual growth rate of approximately 12% between 2010 and 2014, well ahead of inflation. As the government ramps up its investment in infrastructure projects, project finance is seen as one of the most promising areas for lending growth. Boosting SME lending is also a priority for the economy, with the Central Bank of Oman introducing a requirement for all banks to allocate 5% of their total loan books to SMEs by 2016. This chapter contains an interview Hamood Sangour Al Zadjali, Executive President, Central Bank of Oman; and a roundtable discussion between AbdulRazak Ali Issa, CEO, Bank Muscat; Amin Al Husseini, CEO, Oman Arab Bank; and Lloyd Maddock, CEO, Ahlibank Oman.

Strong asset growth and the expansion of the newly launched sharia-compliant segment have been central to developments in Oman’s banking sector in recent years. A small number of institutions account for the bulk of market share, and this concentration is set to increase if a planned merger between Bank Sohar and Bank Dhofar goes ahead. The industry is tightly regulated and widely regarded as stable, though an economic slowdown on the back of low oil prices could see lending growth slow in the…

As part of the effort to diversify Oman’s economy, the authorities are keen to boost growth in the small and medium-sized enterprise (SME) segment, which is comparatively underdeveloped. The segment is thought to contribute 16-20% of national GDP, which the Central Bank of Oman (CBO) in a 2014 report described as “indicative of a sector with limited contribution to the overall economy”. Where Credit Is Due Accessing credit was the business challenge most cited by SMEs surveyed for a study…

Interview:Hamood Sangour Al Zadjali Given the current low oil prices, what monetary and fiscal policy changes is the CBO considering? HAMOOD SANGOUR AL ZADJALI: Although the present low oil prices will pose some challenges to the Omani economy, it should be possible to maintain the trajectory of growth achieved in recent years. This is due to the resilience of the economy and prudent fiscal and monetary policies. In the present situation the main objective of both the government and the CBO…

Interview:AbdulRazak Ali Issa,Amin Al Husseini,Lloyd Maddock What do you see as the most significant impact over the coming years of the introduction of Basel III regulations in Oman? LLOYD MADDOCK: Basel III is largely concerned with the amount of capital that banks are required to maintain in supporting their operations. All banks in Oman currently hold in excess of the Basel III required capital. However, as a bank grows and expands, it will need to raise additional capital… 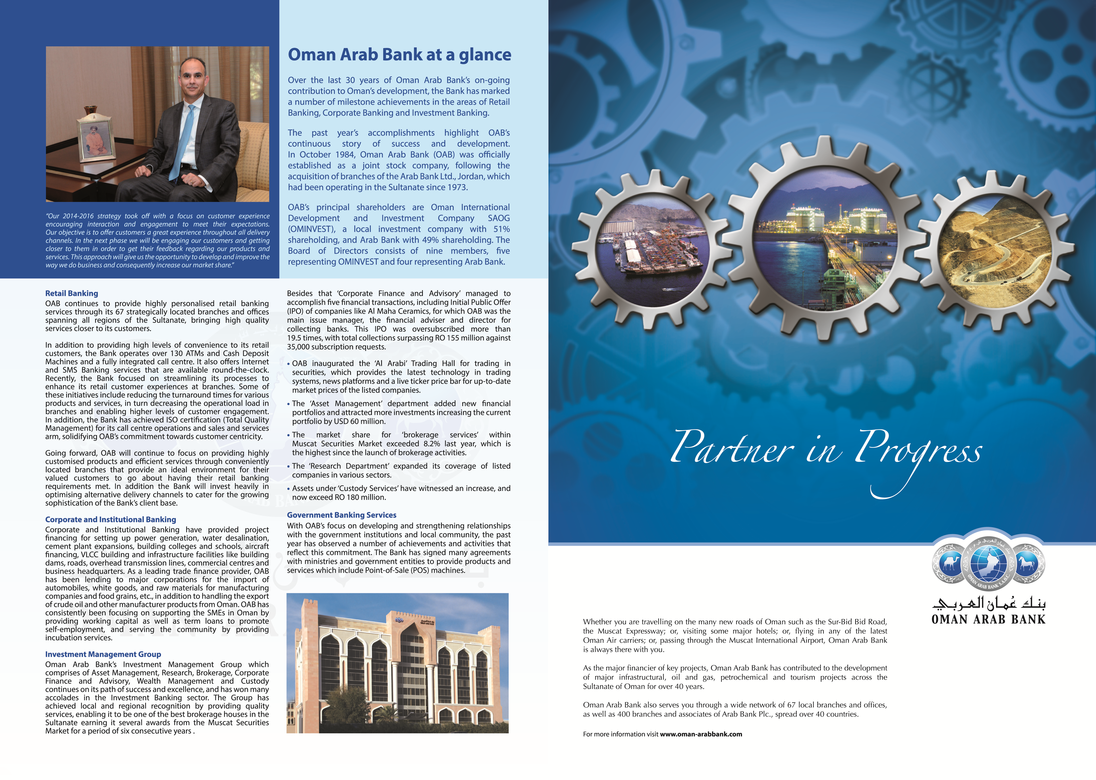